Today we start anew. After much anticipation, the Mayan long-count calender resets and we can put the 13th behind us. Here at The CG Project, we’ll celebrate by looking back at 2012, the longest year of our lives and forward to the work that lies ahead… also with an early-birthday lunch for Christian Kozlowski, who turns 19 in two days.

Winter 2012 – Looking back, I hardly recognize last Winter as part of this year. I remember being hopeful for the year to come and content with the work we’d done to that point.

Dimitri Moore’s photography was hanging at Morton College. He was single and living in Chicago at the time. Today, he’s living in San Fransisco with his wife, soulmate and counterpart, Naomi Moore. Diana was in their wedding party and it was tough to see them go but things are going well for him out there. I’m also editing a comedy that he produced in collaboration with Nicole Pernie, and Jennifer Peepas.

Our trip to Los Angeles in March gave us a chance to catch up with other friends that migrated to the west coast at around the time that Rahm Emmanuel came into office. Neil and Margie Blakemore were the first to take the leap to L.A. and we’re thrilled that they’ve started finding opportunity out there. Maria Abraham and Fielden Nelson moved out there shortly after. Fielden’s been published a few places since they moved out there and his blog, Fattened Paradise, has reached profound depths with Here in the Valley Low.

Spring 2012 – Signs of tough times to come but we forged ahead anyway.

Diana worked her butt off over the Spring by making two site-specific installations in a little over a month. Maritima was part of a group show at the Bridgeport Arts Center with Rita Grendze and co-curators; Alan Leder and Lelde Kalmite. 342 was a solo show that was curated by Brian Selke of Best Friends Gallery (formerly Treehouse Gallery) in Arlington Heights, IL.

I was knee-deep in gardening, this year we started a video series called The Cinematic Garden after being inspired by farmers and chefs at The Good Food Conference. Throughout the year, I began collaborating with an old friend, Matthew King and also spent a day as a background actor for Chris Sato’s zombie film called Heaven is Hell.

We’re still in the throes of a devastating drought. I prayed to the Aztec God, Tlaloc and wrote a parody country song about it throughout July and August. If one good thing has come out of this, it’s that a lot of people started keeping rain barrels and deciding to water their gardens instead of their lawns. The bad news is that we still aren’t getting enough precipitation. Last night, the streak broke for Chicago’s longest stretch without snow.

We ended the Summer with another solo show for Diana. Time and Other Preoccupations at McHenry County College was kicked off with The CG Jubilee, thanks to our first sponsor, Mimi’s Garden. Mimi’s Garden is one of a bunch of small businesses that have sprouted up recently, including Keek’s Boutique and Favorites Favors. They all contributed to our celebratory BBQ, along with our other official sponsor, Season’s Specialty Produce and Market.

The Presidential Election between Barack Obama and Mitt Romney was the most divisive in my lifetime. Our collective mind’s been split in two and we’re still sorting through the political and economic mess that we started the year with. Even though we voted to restore Hope by re-electing President Obama, there is a lot of healing that must take place before we can move forward. We’re days away from the fiscal cliff/sequestration/austerity and we seem more broken than ever.

On the brighter side of things, we had fun making Jack-O-Lanterns this Fall and I had a photo exhibition called All Things Serve the Beam at Morton College, which gave me a chance to speak to young photographers on campus and tour their darkroom. We also caught the MFA thesis screening for some of our friends, including the aforementioned Maria Abraham, Thavary Krouch and Timmy Tamisiea.

I’ll leave you with our plans for the immediate future. In the coming days, we’re going to the Dominican Republic to recharge our batteries. When we return, we’ll get back to work on Diana’s next big project, a sculpture for the lobby of the Willis Tower. As our beloved Uncle Joe Biden would say “It’s a big fuckin’ deal” and we’ll need your help to see it through.

This entry was posted in Chicagoland, Growing. 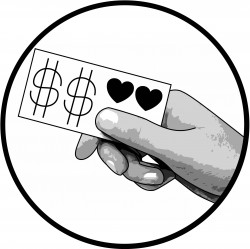